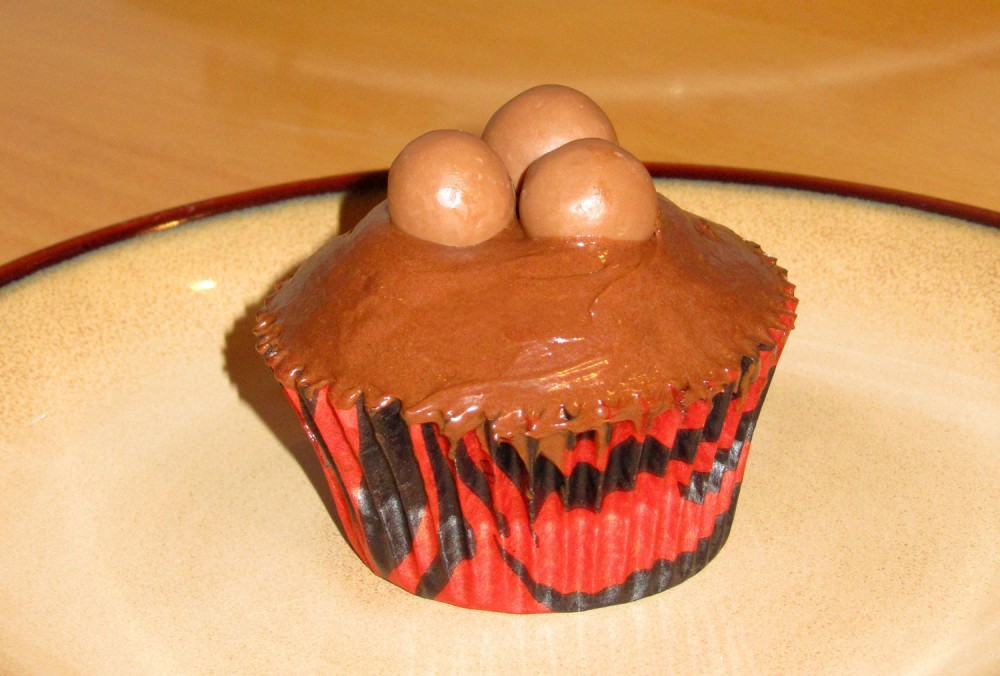 These chocolate malteser cupcakes are easy to make and are also something a little different to the normal cakes on this site as I noticed that I haven’t ever made any cupcakes for it, until now!

Cupcakes seem to have become very popular over the last few years and I can see why. They’re easy to make, great to have with a warm drink after dinner and you can even arrange them onto a multi-tired cake stand and use them instead of a more traditional birthday cake.

One of my friend’s birthdays was fast approaching and I never know what to get her, so I figured chocolate malteser cupcakes would be a pretty safe bet – I mean what girl doesn’t like cupcakes lavishly smothered in chocolate?

This cupcake recipe calls for malted-milk powder which seems to be rather hard to get in the UK, but I found that using traditional Horlicks powder worked just fine!

Why not try baking your own chocolate malteser cupcakes? They’re easy to make and they looks really tempting once they’ve been smothered in chocolate icing and decorated with a few maltesers.

For the Chocolate Malteser Cupcakes

To make these chocolate malteser cupcakes preheat the oven to 190°C (375°F), Gas Mark 5, and fill a muffin tin with cupcake/muffin cases.

Using a hand-held electric whisk or a freestanding electric mixer with the paddle attachment, beat together the oil with the milk, buttermilk, egg and vanilla essence on low speed until well blended. Sift together the flour, cocoa powder, baking powder and salt, the stir in the sugar. Add a third of these dry ingredients to the oil and milk mixture and beat in slowly until evenly incorporated.

Beat in a third of the boiling water, followed by another third of the dry ingredients, then repeat with the remaining ingredients, mixing together until they are all combined. Remember to scrape down the sides of the bowl after each addition, to ensure a well-mixed batter.

Divide the mixture for the chocolate malteser cupcakes between the cupcake/muffin cases, filling each by two-thirds. Any remaining batter can be used to fill some extra cases in a seperate tin. Place in the oven and bake for around 18 minutes or until the cupcakes are springy when pressed. Allow to cool for around 10 minutes before removing from the tin, then transfer to a wire rack to coll down completely before adding the chocolate icing.

To make the icing, place the choclate chips in a bowl set over a saucepan of simmering water and allow to melt, then reove from the heat and set aside to cool.

Meanwhile, using the electric whisk, whip the cream with the malted-milk/Horlicks powder until it forms soft peaks. In a seperate bowl, beat the cream cheese with the caster sugar until combined, then add the cooled chocolate and mix again.

Carefully fold the whipped cream into the cream cheese mixture, adding half the whipped cream at a time. Divide the choclate icing between the chocolate malteser cupcakes, smoothing and swirling with a palette knife (if you’ve never iced a cupcake before then there’s plenty of great instructional videos on the net), then decorate each cupcake with 3 maltesers. 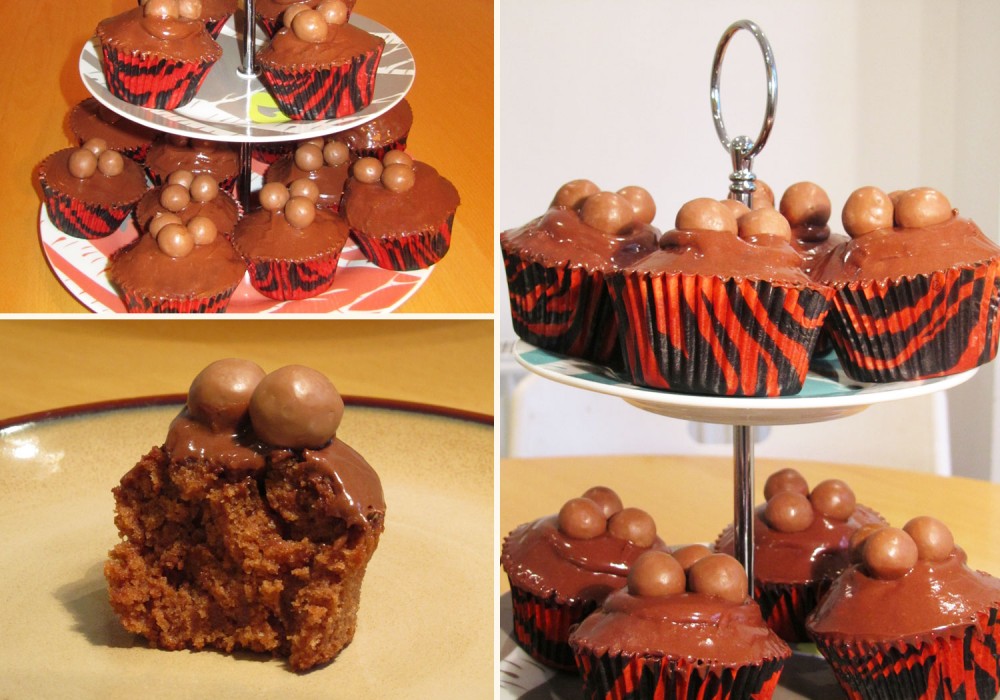