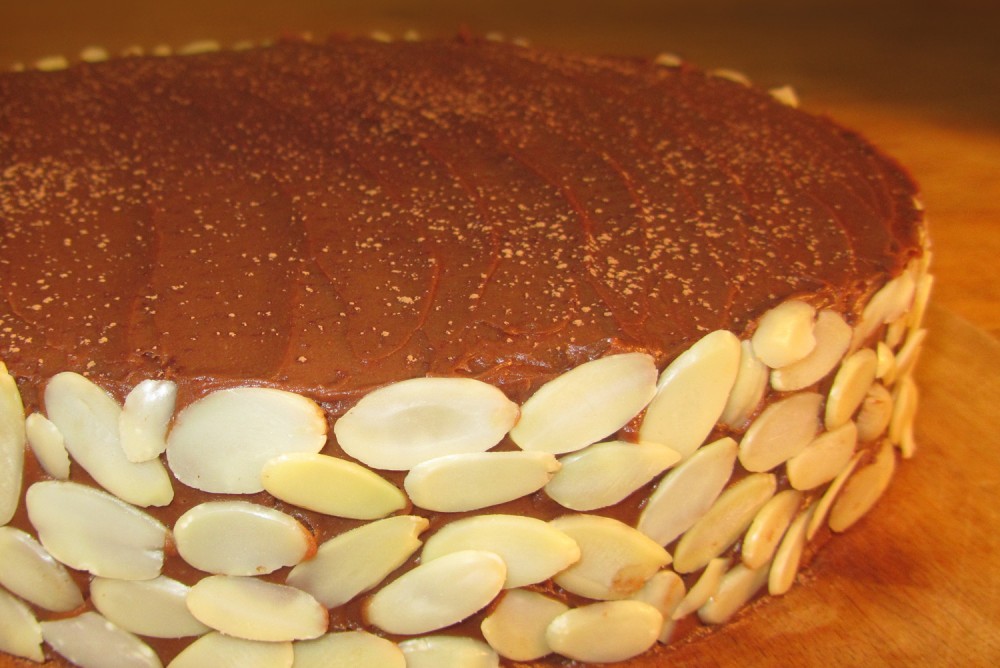 Wow, it seems hard to believe that it was 12 months ago that I was posting the first ever cake on 12cakes.com. Since then I’ve received loads of support from you guys, been interviewed on BBC radio and learnt loads about cake baking in general. Due to the tremendous amount of support and the huge number of cake books I’ve been given over the last twelve months, I’ve decided to continue with the 12 cakes project for another year and what better way to celebrate an anniversary than with a cake!

The actual name for this Chocolate Almond Cake is Reine de Saba, ‘Queen of Sheba.’ This cake is from the absolute classic cookery book – ‘Mastering The Art of French Cooking by Julia Child and Simone Beck.’

The Chocolate Almond Cake you see in the photos is a rich and deep flavoured chocolate cake with rum where the almonds and rum play a supporting role that helps to intensifies the chocolate’s flavour.

Why not try baking your own chocolate almond cake? It’s not too hard to make and it looks really good once the edges have been decorated with sliced, blanched almonds.

For the Chocolate Almond Cake

To make this chocolate almond cake, start by setting your oven to 325°C. Grease and line an 8 x 1½inch round cake tin.

Put all of the dark and milk chocolate into a glass bowl and set over a shallow pan of water. Bring the water to a simmer and then add the strong rum (or coffee). Let the chocolate melt and gently stir until everything is combined into a smooth mixture.

In a mixing bowl, use a hand-held electric mixer to cream the softened butter until it’s soft and fluffy, then add the 113g (3.75oz) granulated white sugar. Beat for 1 minute, then add the egg yolks and beat well.

In another mixing bowl, beat the egg whites until they’re foamy, add in the cream of tartar and the salt, then mix well until soft peaks form. Gradually beat in the 2 tbsp of granulated sugar and continue mixing until stiff, slightly shiney peak form.

As soon as you’re finished, pour the batter into the prepared cake tin and make sure the top is even before placing it on the middle shelf of the pre-heated oven.

Prepare the chocolate icing: In a bowl set over a shallow pan of water, combine both the white and dark chocolate with the rum (or coffee), bring water to a simmer and let the chocolate melt while stirring until smooth.

Add the salt into the melted chocolate, then using an electric hand mixter, beat them together. Chop the softened butter up into small pieces and slowly add them into the butter while beating over cold water until the icing is firm enough to spread. Dollop the icing onto the top of the cooled chocolate almond cake and spread it evenly over the top and sides.

Finally, dust the top with cocoa powder and to add the finishing touches to the cake, press a design of almonds over the icing. I chose to add mine to just the sides of the cake but I’ve seen then put over the top too. Do what looks best to you.